The war memorial was erected in 1920 by funds raised from the public. It was originally located on a traffic island near the corner of Brookfield and Moggill roads, and was relocated to its current position in 1988.

Other conflicts commemorated are World War II, the Malayan Emergency, the Korean War and the Vietnam War. Some are recorded on separate monuments.

With the 100th anniversary of the Great War the men who are named are being researched by Kenmore High School Students with the support of the RSL as the ‘Adopt a Digger’ program.

One of the current projects of the society is to research the 12 men from the district who went to the Boer War. When completed it will be posted on the web.

The Local Men of Gallipoli

There are 66 men named on the Kenmore War Memorial from World War 1. Of those, 19 were killed. They came from the broader region including Kenmore, Moggill, Brookfield, Fig Tree Pocket and Pullenvale.

Thus far research shows six men enlisted in 1914 and 27 enlisted in 1915. The others were later. This pattern was common across Australia because of the publicity of the Gallipoli campaign in 1915.

There were nine men who were at Gallipoli.  Three of them were killed at Gallipoli. Six survived, with one of those being killed in action in Egypt in 1917.  The display is on eight of the men. One, Thomas Currie, appears to have been at Gallipoli but very little information is available. 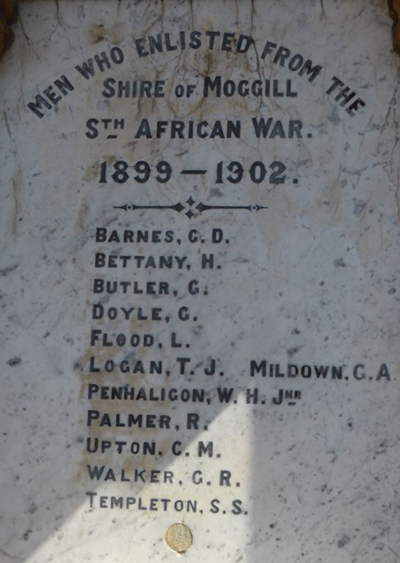